Women, War and the Making of Bangladesh. Remembering 1971

From the Express Tribune:
“War destroys the vulnerable and unfortunately the individual sufferings of non combatants are seldom highlighted,” Dr Yasmin Saikia, author of Women, War and the Making of Bangladesh. Remembering 1971, said at the launch of her book on Tuesday. The book was launched at Forman Christian College.
Dr Saika, a professor of history at the Arizona State University, explained that the book is about families with memories of violence and trauma, “missing in the archives of history of the war.”
The book records the sufferings of Bengali and Bihari women, some of them raped and tortured during the 1971 war. The author said she had interviewed 250 families over 10 years. Those interviewed included those directly affected by the war. Some of them were perpetrators of sexual violence. 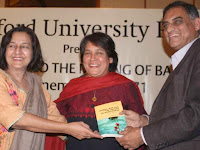 Dr Saikia said she wanted to focus on the war as traumatised women’s experience and not as a War of Liberation, as widely accepted by the Bangladeshi public. She said from the day that she had started writing the book, she had consciously tried to avoid avoided writing a particular type of history. “I tried to persuade these women to speak up about their personal experiences, including the war babies,” she said. She said some of the women had lost their citizenship and for some writers their credibility.
Posted by Melisende at 9:14 AM