The emergence of the actress on the Restoration stage was revolutionary. As every pupil of Shakespeare knows, it was men in drag who took the ladies' parts before. Imagine the frisson, then, when Nell Gwyn first showed herself aged 14 to a packed house at the Theatre Royal, Covent Garden, in 1664. This unprecedented female exhibition provoked salacious frenzy, which theatre companies hoped to harness to their profit.
The showcasing of beauties in "breeches roles" exploded ideas of decorum. Actresses welcomed the chance to demonstrate the virtuosity demanded by parts such as Viola and Rosalind. But the display of their shapely legs was condemned as an exercise in "brazenness" which confirmed the shameless immodesty and sexual availability of the actress. That both theatre-land and prostitution had their metropolis in Covent Garden was not lost on the press. From the first, the "actress" of popular imagination was a shimmering mixture of whore, coquette, talent and celebrity.
A new exhibition at the National Portrait Gallery, The First Actresses: Nell Gwyn to Sarah Siddons, investigates the concept of the "actress" in all its troubling contradictions. The artists include Reynolds, Gainsborough, Hoppner, Lawrence, Zoffany and Gillray. 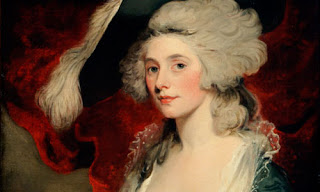 The exhibition is the brainchild of Gill Perry. When she was writing her book Spectacular Flirtations: Viewing the Actress in Eighteenth Century Art and Culture, she realised that the NPG had an exceptional collection of early actress portraits – "And not only that they are in Covent Garden," she says.
When modern critics rate a female performance on whether it's theatrical Viagra or doubt that a woman is thin enough to play Juliet, they invoke a long and dishonourable tradition. "Modern actors should see the first actresses as trailblazers, fighting prejudice and innuendo," Perry concludes. Certainly women today might take comfort that so many of their forebears managed to seize the public relations initiative and shape the culture that so objectified them.

Posted by Melisende at 2:45 PM