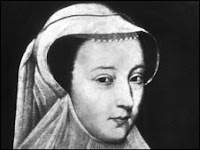 The last letter ever written by Mary Queen of Scots is to go on display for the first time in 30 years.

The 422-year-old manuscript - written six hours before her execution - will go on show at the National Library of Scotland in Edinburgh on 15 September.

The letter, which will be displayed for seven days, was written on 8 February, 1587 to the King of France, Henri III.

The Catholic Queen told her brother-in-law she would die a religious martyr and not for purely political reasons.

King Henri III was the brother of her late husband, Francois II.

The letter revealed that, just hours from death, Mary asked Henri to ensure her servants' wages were paid.

Posted by Melisende at 8:58 PM

And I wonder if indeed the wages were paid.

Great exhibit. I'm in South Carolina, but I wish I could see it. I hope the Scottish National museum will post some good photos of it.

What a story was Mary's.

Probably the greatest "lost cause" ever.
I was looking at the photos of Fotheringay on the 'net, and of course, there's nothing left of the castle but the big motte or mound and some vestigial stonework...and the Nene flowing past. On of THE places I'll visit if I ever make it to England.

I've been watching "The Tudors" on Showtime, and even given the historical liberties taken, after reading some on that period, it seems that there was also a fair degree of accuracy in the production. I thought the casting was excellent, with Natalie Dormer being outstanding, as Anne.

You're tempted to say that, with Elizabeth's execution of Mary, and Henry VIII's cruelty, that the Tudor's were a bloody lot, but I guess they all were, then.

I doubt it, Marie. I think Antonia Fraser, in her bio of Mary, wrote that Elizabeth's men didn't even want her body to be kept intact, or given a known burial place, so as to keep the "martyr" aspect of her execution to a minimum.